Durban – A pepper spray alarm thwarted a group of robbers who broke into a Botha’s Hill shop in the early hours of Tuesday morning.

It was the third time robbers activated the alarm and were forced to retreat.

Video footage shows the men crawling along the shop’s floor for several minutes before setting off the Compusafe pepper alarm.

“This is the third time the alarm has saved us. Every time they get in and trip the alarm, the pepper spray sends them running,” Bothma said.

Footage shows the men scattering as a cloud of noxious gas fills the room. They manage to steal a cash drawer during their hasty retreat.

“Our computers were saved because they are the usual target.”

He said police were investigating.

Welcome to our Blog

Compusafe Electronic Asset Security specializes in physically securing IT equipment, servers, office computers, laptops, tablets and DVR’s  against theft during business break-ins.
We also specialize in Pepper Spray Alarms, which have become a very popular crime fighting tool in SA to force these computer thieves straight back out your premises, leaving them empty handed and feeling very sorry for themselves! 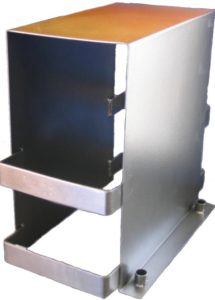